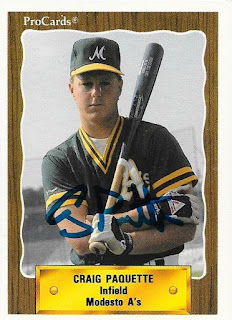 It took two tries, but I got a TTM success from Craig Paquette.  I had been wanting to get him for a long time, but kept putting it off.  When I finally sent to him, I picked the wrong address.  I don't know how that happened, but when the envelope came back RTS and I checked the webpages, I wanted to headbutt my wall.  Anyway, I tried again, and was successful. 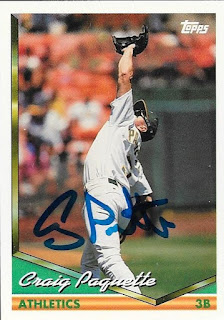 I had a bunch of Paquette's cards, but had to narrow it down to four.  I had to add the ProCards AAA (at the top) to the binder.  I also need more 1994 Topps in the binder, so this one was an easy choice. 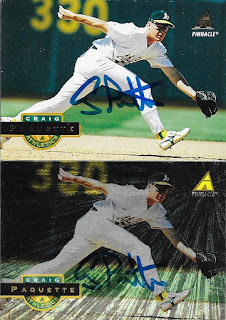 Finally, I liked the 1994 Pinnacle and Pinnacle Museum so I included both of those.  The Pinnacle Museum actually came out of an album that my mom gave me, so it was nice to get that one signed.