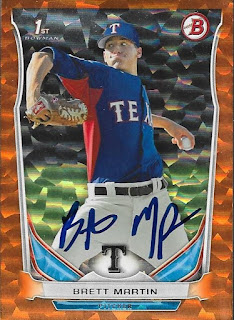 Last night was the home opener for the Down East Wood Ducks in Kinston, so for the first time since September 2011, professional baseball returned to historic Grainger Stadium.  We were washed out of the exhibition game against Mount Olive University last week, but beautiful weather greeted us last night.  I brought along a decent-sized group to the game against the Winston-Salem Dash; it was me, my wife, my son, my brother Andy and our friend, Gavynn.  I had made plans beforehand to meet up with the Ducks' starting pitcher, Brett Martin after the game to hand off a signed photo of my dad's race car, since Martin is a huge fan of motorsports.  My mom came in clutch with the photo, and even had Dad sign it "To Brett", which was a nice touch. 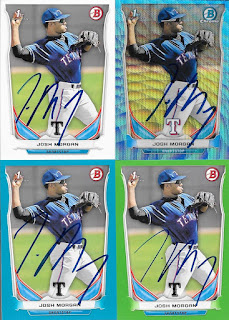 Before the game, Chris and I did some graphing on the Wood Ducks side of the stadium.  I had brought (and bought) some cards of Dash players, but it turns out that two of the guys that were on the Dash roster aren't there any more.  Oops.  Still, I had plenty of Wood Ducks guys I wanted to get, since I bought some cards specifically to get signed by them.

At the "meet the team" event last Sunday, Josh Morgan told me that he would sign any cards that I had, so when the finally arrived, I wanted to make sure I got them signed.  They turned out great; and Chris was able to get a couple as well.  He even got one signed for my friend, Carson, who I accepted a 50/50 consignment for. 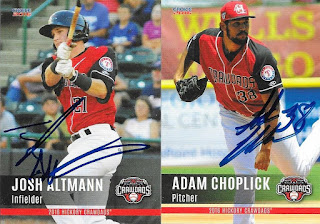 I picked up two sets of cards of the 2016 Hickory Crawdads; one for me and one for Chris.  The both of us were able to get a couple cards signed out of that set.  I need to help Chris fix his autograph book, as some of his photo corners are already failing (he put them in wrong, then pulled some up to try to fix the problem, now the cards slide around). 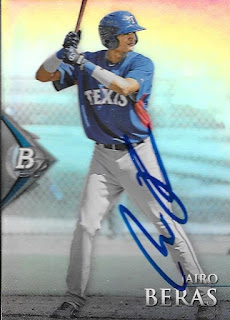 Like I said above, I accepted a 50/50 card consignment from my little buddy, Carson.  He sent four cards that he wanted me to try to get signed for him, and I was 3/4 successful.  I got him a nice Bowman Platinum Jairo Beras, and the part for me was this one. 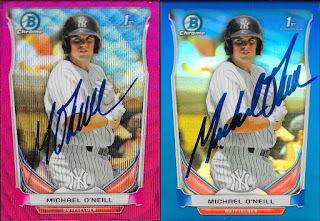 Chris was able to get Carson a signed 2014 Bowman Chrome of Michael O'Neill.  O'Neill came over and signed 3 of the four cards I had in my book.  His cards were some of the ones I really wanted to get signed as soon as possible. 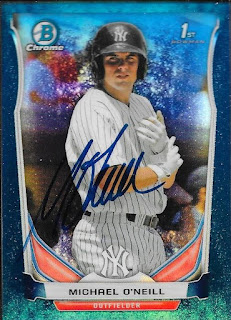 This bubble refractor from 2014 Bowman Chrome was the card that I was most excited about getting signed by O'Neill.  I loved these cards when they came out (and picked up several for my Chris Davis PC).  It turned out great. 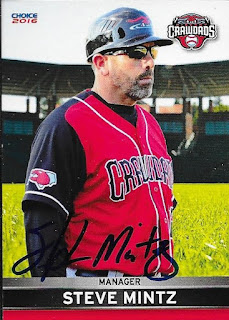 I was finally able to find cards of Ducks pitching coach, Steve Mintz (Mount Olive University's own). I bought several off of EBay, and got one from each of our team sets. 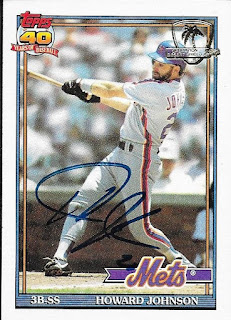 I still had tons of Howard Johnson cards that I could get signed, but he would only sign one yesterday.  Unfortunately for Carson, hi card wasn't the one at the top of the Johnson list last night.  I had two cards I bought specifically to get signed, and one of them was a success.  This 1991 Topps Desert Shield Howard Johnson fits the profile of "different" cards that I wanted represented in my binder.  They are tough to come by, so having a signed one in the autograph album was a must.  Luckily, I found this card on EBay for $3.75 + $1.00 shipping.  I have one other Johnson card that I picked up to get signed that I will have to get next time (along with Carson's 1987 Fleer). 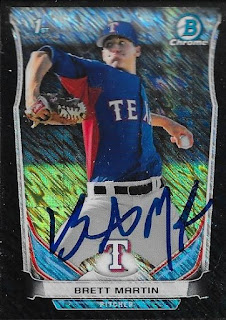 Martin had a pretty good Wood Ducks debut last night.  He struck out 7 Dash players in 5 1/3 innings pitched.  In the first inning, he only needed 10 pitches (all strikes) to retire the side, with two strike outs.  When we met him after the game, he signed everything that Chris and I had, including four of these 2014 Bowman Chrome black shimmer minis.  I kept one for myself, gave one to Chris, then gave the other two to Gavynn and Andy as souvenirs for their trip.

The Wood Ducks won last night 4-3 off of a walkoff error in the 10th inning.  It was a really exciting game, and I was glad to have been a part of it.  I am glad Martin pitched well.  I plan on backing him fully as a fan, now, since he has been awesome to us the times that we have met him.
Posted by William Regenthal at 5:53 PM