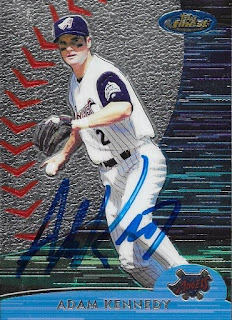 Here is a really cool TTM success that was populated almost solely from the "boxes in the back" of the card shop.  There are two Topps cards that were mine, but the rest of the cards were ones I wasn't around to see when they first came out.

The above 2000 Topps Finest was the one I was most excited about seeing come back.  It turned out really nice, and scanned pretty well. 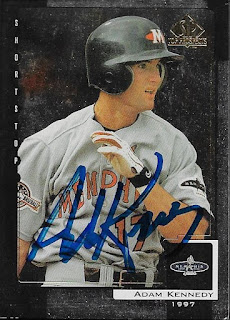 this 2000 UD SP Minors is pretty cool.  They had a bunch of these cards in the back, and I found a few good ones of some TTM guys, so I'm hoping a few more of them come in. 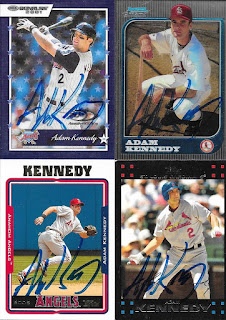 Kennedy's Sharpie looks like it was about to die, but I still got a few other nice cards signed.  I even was able to add a few ticks to the Topps Autograph Project, as well with the 2005 and 2007 Topps.  Those two sets are pretty low in the rankings in the project, at 8 cards for 2005 and 4 for 2007.