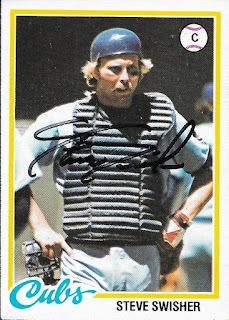 I like it when I can get a ton of cards signed from a player, except for when it comes time to blog them.  Still, I got a nice success from Steve Swisher on a bunch of late 70s and early 80s Topps cards.  I used this success to push the count up on several sets that needed it, most of all, 1978 Topps.  For whatever reason, I wasn't able to find any of that year in bulk until the February card show.  I've taken those bulk cards and mailed out quite a few, and some are starting to come back in. 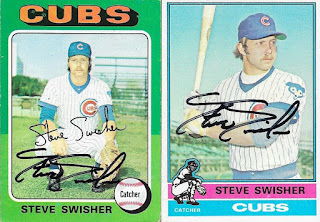 I had been sitting on the above 1975 Topps for a long time.  This might not have come in the package of 1975 Topps that Max gave me, since he was a Cub, but he may have given it to me.  I'll have to ask him.  I know the 1976 came from my box I got from the Columbia antique shop. 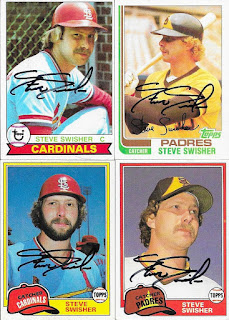 Here are the other Topps cards that he signed for me, including a 1981 Topps, and 1981 Topps traded.  I like the 1981 set, and that set is climbing up the ranks and making a run at 1987 for total number of cards that I have gotten signed.

I mailed to Swisher on February 21 and got the cards back on March 27, for a 34-day TAT.
Posted by William Regenthal at 6:26 PM