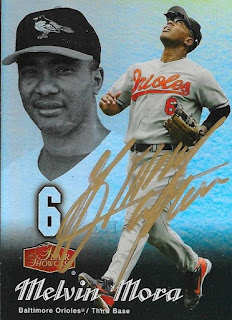 Sometimes it's tough to send a TTM request to a former Oriole.  Tough in that I have so many cards to choose from, I often have a hard time deciding what to send out.  When I saw that Melvin Mora was signing TTM, I went through both Orioles boxes and pulled out mostly Topps base cards of his to send.  I then saw this 2006 Flair Showcase and remembered that I didn't have any of these in the autograph album, and how it would look cool when signed.

I got my return from Mora, and was really excited to see that he signed the cards in gold Sharpie!  I figured it would be blue or black that he would use, but Mora used gold.  Man, the gold Sharpie really looks awesome, too.  The card scanned so nice, I couldn't believe it. 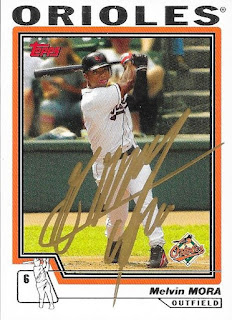 He also signed this 2004 Topps in gold.  I picked this one over the other Topps base cards of Mora because I have very few 2004 extras lying around, so I figured this would be a good one to add another tick mark in my Topps Autograph Project.

Mora was traded to the Orioles in 2000, along with Mike Kinkade, Leslie Brea and Pat Gorman for Mike Bordick and spent ten seasons with the O's.  His time there, and steady play, earned him induction into the Orioles Hall of Fame in 2015.  He appeared on the Baseball Hall of Fame ballot in 2017, but did not receive any votes.