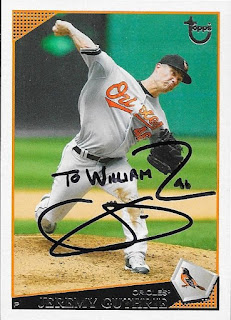 Adding a former Oriole to my autograph album is always a special day.  I was really surprised to get this return from Jeremy Guthrie at 8:00 AM on a Saturday morning; my mail usually comes at 5:00-5:30PM.  What had happened was, my mail didn't come at all that Friday night.  I checked my mailbox up until 8:00PM, then figured my mail lady had disappeared.  I had a couple TTMs in the mailbox to send out, and the flag never dropped.

As Chris and I were pulling out of the driveway to go to his game that day, another mail person was dropping off our mail.  So, I got my stuff a day late, but it came.  Whew.

I was glad to get the above Target exclusive 2009 Topps Throwback signed.  This goes into the "I like to get different cards signed" aspect of the collection. 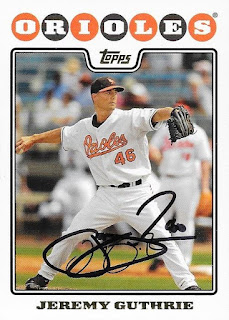 I mailed to Guthrie at Nationals Spring Training on February 8 and got the cards back on March 18, for a 38-day TAT.
Posted by William Regenthal at 6:14 PM