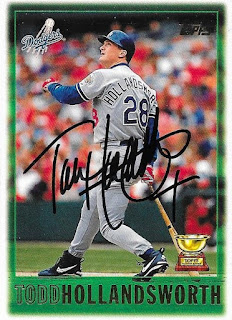 The autograph signers who only do one signature per request create additional challenges for an autograph collector.  The challenges for me (and I'm not complaining) include the difficulty on choosing which sole card I am going to send if I have multiples (like what I had here with Todd Hollandsworth) and when I finally get around to posting my success, it doesn't do much to reduce the size of my "to be blogged" stack.

Still, I am happy with this success from Hollandsworth.  I chose a 1997 Topps because I don't have a lot of them in the album, and I also liked having the Rookie Cup logo on there.  Hollandsworth has a really nice signature, and it shows up well on this card.

Hollandsworth (b. 1973) played in the majors from 1995 to 2006 for the Dodgers, Rockies, Rangers, Marlins, Cubs, Braves, Indians and Reds.  He had 871 hits, 98 home runs and a .273 batting average.  He was the Rookie of the Year in the NL in 1996, and won the World Series with the Marlins in 2003.  Lately, he has been doing radio and TV commentary.  He was with the Cubs and XM Radio, but left those posts to become the Marlins color analyst for Fox Sports Florida full-time for 2017.

I mailed to Hollandsworth on February 20 and got the card back on March 10, for an 18-day TAT.
Posted by William Regenthal at 6:34 AM