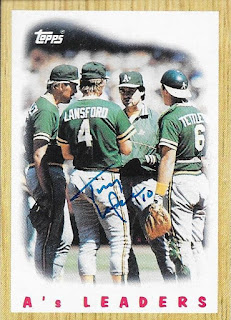 I had to mail to Tony LaRussa again so I could get him on a 1987 Topps card.  He did sign an 87 for me, but I actually had sent two.  He left the 1987 Topps base card unsigned and signed this 1987 Topps A's Team Leaders.  I'm ok with that, I can always try again at a later date (maybe Spring Training next year). 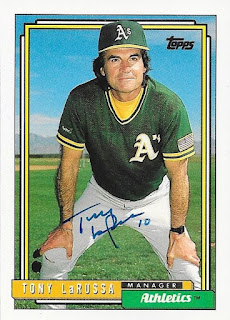 He also signed this 1992 Topps that turned out really nice.  I had several cards to choose from, but went with this, and those two 1987s.  Getting two of the three signed really isn't too bad at all.

I mailed to LaRussa on February 22 and got the cards back on April 5, for a 42-day TAT.
Posted by William Regenthal at 5:44 PM