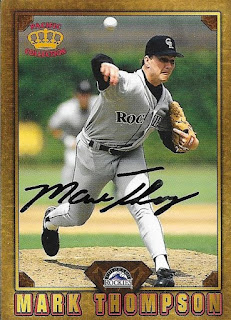 I continue to whittle my "to be blogged" stack of TTM successes down.  I have actually slowed down on sending out requests since the season has started.  Still, I have a lot more to post, and a lot more still out in the world, waiting to be sent back.

I got a few nice cards signed by Mark Thompson recently.  The above 1997 Pacific was a card that I had floating around in my random card box for a long time.  I finally was able to take it and transfer it to the autograph album with this success. 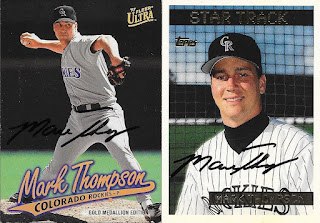 The 1997 Fleer Ultra came from one of the boxes that Mom found for me, and the 1995 Topps came out of the hobby box that I bought to push my set along.