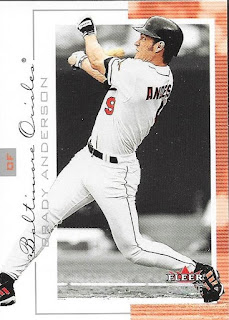 I'm still slowly catching up on TTMs and other posts that have fallen behind.  There are still cards from the National I want to show, and still some Christmas gifts.  I also have worked out a few deals, and need to post those, especially the ones which came without notes.  Those are hard to remember where they came from, so I have to keep them on my Instagram until I have posted them on the blog.

One such deal was a quick sale/trade with a guy named Xavier.  He actually bailed me out on a deal that fell through with another kid on Instagram.  I went through ALL of my card boxes to find every Bartolo Colon card for someone, only to have the guy not pay for the cards.  He even told me he sent the money three times (yeah right).

So, Xavier swooped in and bought the Colons for the price the other guy agreed to.  He also included a stack of Orioles cards for the PC.  The above 2001 Fleer Genuine was one that I didn't recall seeing before.  Xavier also sent me a red Chris Davis Topps Chips.  I didn't have that yet, either!

Thanks for the deal, Xavier.  I also appreciate not having to put those Colons back in my box after spending hours searching for them.  I should make people pay a deposit for making me search my boxes, because this has happened quite a bit.
Posted by William Regenthal at 9:24 PM