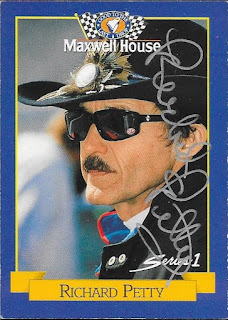 Sometimes, I venture outside of baseball for a few TTMs.  I got a box of cards from my mom that had been in the attic and for whatever reason, this Maxwell House NASCAR card was in there.  I've never been a NASCAR fan; I have always stuck to Drag Racing, but you can't live in North Carolina and not have at least an awareness of it.

So, when I saw that Richard Petty signed TTM, I wanted to be able to use this one lonely NASCAR card.  What better name from NASCAR could I attempt, anyway?  I believe I have met Petty once, when I was much younger.  I believe it was at a chicken stew at a drag racer's house, but I don't quite remember.  I do know that I met Dale Earnhardt a long time ago (Mom still has the autograph that I got).

I mailed to Petty on January 9 and got the card back on January 14, for a 5-day TAT.
Posted by William Regenthal at 10:03 AM