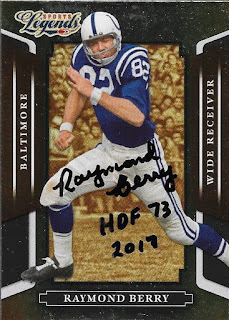 Here is another case of me having a random card floating around my boxes that I finally got the nerve to send out for a TTM auto.  This Raymond Berry card has popped up on my desk and in my boxes for a long time.  I had been holding it for someone that I thought was a friend, but when he scammed me, the card was dumped in my dime box for card shows.  There the card sat, until I was going through the box one day and saw it.  I decided to see if Berry signed TTM, and was pleasantly surprised that he did.

Berry inscribed the card with his HOF induction year and also the year which he signed it.  I thought that was a really cool touch. 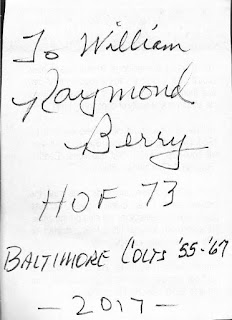 Berry also included this signed testimonial, which, again, was a nice touch.  The coolest thing about the TTM success was that Berry included a note card asking me to explain the origin of my last name.  He left a spot on the card for an explanation and a SASE to send it back to him.  His note said that his hobby is history/origin of American last names.  So, in effect, Berry TTMed me!  That was a really cool touch!

I mailed to Berry on January 9 and got the card back on January 20, for an 11-day TAT.
Posted by William Regenthal at 6:39 PM