After the conclusion of Fan Fest in January, I figured Michael and I had exchanged all of the O's cards and items that we would be exchanging for a good while.  I was surprised to learn the Monday following Fan Fest, that Michael had dropped a package in the mail to me.

I have had someone pick up a Dariel Alvarez auto for me, but I didn't have the 2015 Bowman Chrome.  Felix Pie would be a great TTM subject, but he doesn't sign, from what I can tell  I don;t know much about Chris Snyder, but the 2010 Topps is a nice card. 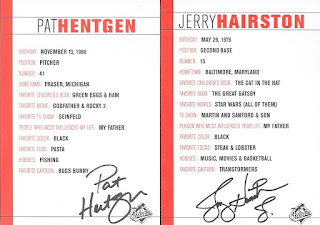 Here are the backs of the post cards that Michael sent; signed by Pat Hentgen and Jerry Hairston, Jr.  Hairston is someone I really would like to get TTM, but I know he doesn't sign.  Hentgen is someone I have sent to, but I havent gotten anything back as of today.

Thank you so much for the care package, Michael!  I appreciate it!
Posted by William Regenthal at 8:48 PM