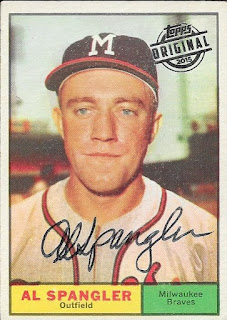 1961 Topps cards weren't the only ones I picked up from the antique shop in January.  I also grabbed a few 1969 Topps for my set.  I found out when I got home that I hadn't quite updated my needs list like I had thought.  I had maybe three or four of the cards already.  One of them was Al Spangler.  No worries, though, I saw that he signed TTM, so I sent my extra 69 along.  After a look through some boxes, I saw that I had this 1961 Topps buyback and a 1968 as well, so those went too.

I'm really not the biggest fan of how Topps does their buybacks.  I don't care for the foil stamps on the cards.  I see the point that some folks need them to be pointed out to them, but if I were building a set, I wouldn't include a buyback with a stamp.  I also don't include them among my Topps Autograph Project.  Still, they're pretty cool, and they give me ideas of guys to look up at times.  All of that being said, this 2015 buyback of a 1961 Topps turned out really nice, I think. 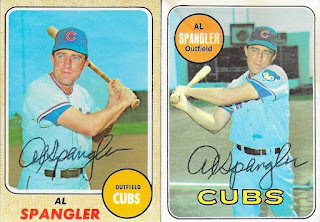 The 1968 was in my vintage box.  I had maybe a third of the set in my box at one point, but have robbed from it to send TTMs.  I don't think I have put myself to far behind on that one if I ever get around to starting the set.  Most of the guys I have pulled from it are non-stars.  I still need to finish the 69 set sometime soon.  I'll get there.

I mailed to Spangler on January 17 and got the cards back on January 29, for a 12-day TAT.
Posted by William Regenthal at 8:38 AM