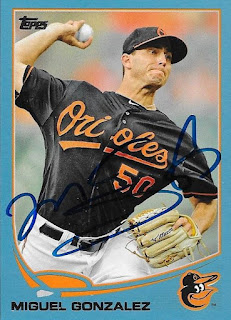 My buddy Max recently went to the annual Fan Fest for the Chicago White Sox and picked up a bunch of autos for me.  We were operating under our normal agreement: I would search for cards that Max needed (mostly past players who would be there) and he would send me a few cards back signed for my trouble.  Max nailed it, as usual with a nice return from quite a few players.

I was really glad to see these Miguel Gonzalez cards come back.  The 2013 Topps Wal Mart blue at the top would have been fine by itself, but Max went for a mini rainbow here with the 2014 cards.  There are red hot foil, Target red and Wal Mart blue cards from 2014.  I thought this was a really cool touch from Max that he didn't have to do.  I sent him a ton of Miggy cards, though, so he had a lot to choose from. 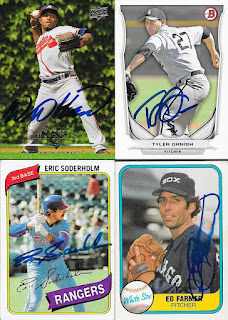 Here are some of the other guys that Max was able to get.  I know I sent him the Willie Harris 2008 Upper Deck.  I may have also sent him the 2014 Bowman Tyler Danish.  I know I failed to find him extra Eric Soderholm cards, since I had gotten him TTM and sent out my extras to a few kids as TTM starter packs.  I also don't think I sent him the 81 Fleer Ed Farmer.  Still, I'm glad to add these cards to my album. 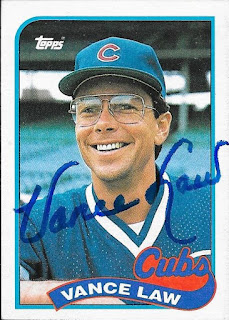 Max also used this opportunity to close a few minor deals.  He sent me a 2009 Topps card signed by Skip Schumacher in exchange for a 2009 Topps Geovany Soto that I had.  I went ahead and swapped those out in my album, so I didn't have the Schumacher to show.  I also sent him a 1988 Topps Traded Vance Law that I recently got TTM for this 1989 Topps.  Since the 88 Traded wasn't a true Topps base, I was completely fine with swapping it out for the 89. 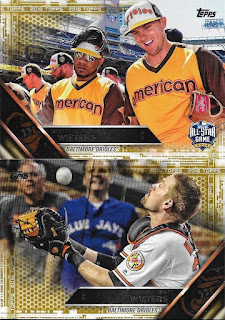 Max also included a few Orioles cards.  Most notably, Mas filled a team bag full of 1981 Fleer Orioles.  There are a few duplicates in the bag, so a few may be sent out as TTMs shortly.

He also included these two 2016 Topps Update Matt Wieters cards.  Funny how his appearance changed so dramatically between the two cards (spoiler alert, that isn't Wieters in the top card).

So, thank you so much, as always, Max!  I loved the package!
Posted by William Regenthal at 6:26 PM