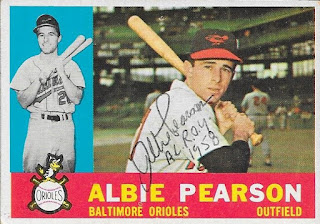 I was able to get an Oriole on a 1960 Topps with this success from Albie Pearson.  I wasn't expecting the awesome inscriptions on all of the cards, so that was a nice bonus.  I still haven't gotten many 1960 cards signed, so when I found this card in my vintage box, I put it in the mailer with the two cards below that I picked up in Columbia. 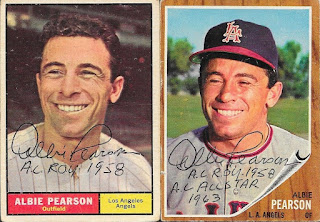 This was part of the 1961 Topps purchase at the Columbia antique shop last month.  Pearson charges $5/card, so I definitely got my money's worth out of this TTM success.

I mailed to Pearson on January 16 and got the cards back on January 27, for an 11-day TAT.
Posted by William Regenthal at 8:12 PM