A Surprise Christmas Gift From a Friend 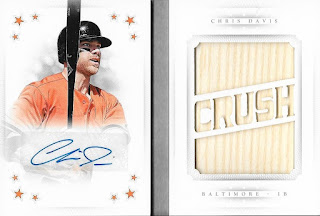 Sometimes, when someone does something, it shouldn't be taken personally.  Like when you talk to someone on an app for a long time, then discover one day that you've been blocked.  That would set alarms off for most people, I think.  When it happened to me, I felt like I had done or said something wrong.  I didn't recall anything I would have done to make this person mad at me.  I felt like we were pretty good friends, but there I was, blocked.  Instead of reaching out, I assumed that the person didn't want to talk any more, so I went about my business as usual.  I was hurt, but I moved on.  I'm a busy person, and I have too much going on to let a simple "blocking" on an app get me too far down.  But it bugged me.  So, after months went by, and the person messaged me out of the blue to ask me if I knew where to find a certain card, I did something that I don't normally do.  I confronted him about what happened.  You see, I don't confront people very well.  I'm usually far too passive with friends, and have a hard time saying "no".  Still, it bugged me so much, I told the guy that I thought we were friends, and I didn't understand why I would have been blocked.  He then explained that he had gotten so busy and fallen so far behind with his work, he had to block everyone so that he could concentrate and get back on track.  It worked, and he was back to normal, but missed one key thing - he forgot to mention that he would be taking some time off and stepping away.  So, in his message asking where to find the certain card, also came an apology.  He felt bad about forgetting to let me know what was going on.  He did remove a lot of card accounts from his instagram because a lot of the kids would message him and distract him from his work, but he kept mine active.  He also had been on the hunt for the perfect Christmas gift for me, the above Chris Davis booklet.

The booklet arrived a couple of weeks ago, all while I have been on the hunt for the specific card he has been looking for.  I know I will find it eventually, a 2009 Topps Update Adam Jones All Star relic.  I know I'll find it.  My friend and I have cleared everything up, and he wants to remain in the background in the card community.  I'm cool with that.  We talk about once a week now, and that works out just fine.  His work is caught up, and I am plugging away with mine.  I'm glad he found the time to think of me for Christmas, though.  I had sent him something as well, even though he was inactive at the time.  He said he felt good that I still thought of him.  That's what I do, I guess.

So, I'll try not to read too much into things.  An app is still just an app.  I need to do a better job of communicating, and I think this experience will help with that.  So, friend, thank you for the awesome Christmas present.  It is definitely appreciated.

The card is a jumbo relic/auto booklet of Chris Davis from 2016 Panini National Treasures.  It is numbered 2/5.  I actually just got a vertcial booklet magnetic case for it in the mail yesterday.  Great timing!
Posted by William Regenthal at 10:46 PM