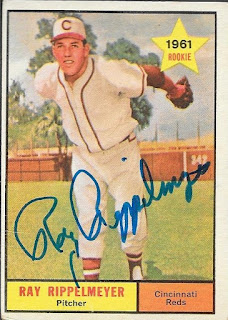 Last month, I took my final trip to the antique shop in Columbia, SC.  Conrad has finally retired and is closing up shop for good.  I made sure to stop by to see him before he closed, and I had to pick up something since I was there.  I picked up a bunch of bulk cards, a signed baseball (which, surprisingly, I haven't posted yet) and several 1961 and 1962 Topps cards for TTM purposes.

I bought those because at the time, I had only one signed 1961 Topps.  So, I figured I would beef up that portion of my ledger, and some of the cards I picked up really looked great.  The first of the cards to come back was this success from Ray Rippelmeyer.  The above 1961 Topps is his rookie card, and I really enjoyed how his uniform looked on this card.  It looks almost like an early 50s Topps in that he appears to be a painting, as opposed to a photo. 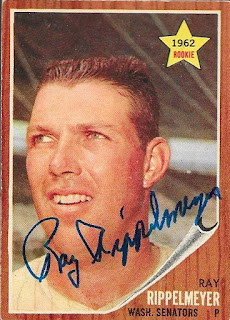 I went through a box of 1961 Topps at the shop and picked out several folks who signed TTM, according to Sportscollectors.net.  After I got my subjects from that box, one of Conrad's helpers searched a few other boxes in order to help me find some other cards to send off of those guys.  He found this 1962 Topps Rippelmeyer for me, and I'm glad he did.  1962 Topps looks great, and that was another set that was not well represented in my binder. 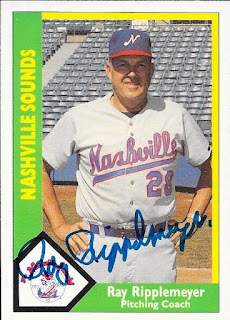 Little did I know, I had another Rippelmeyer card at the house.  This 1990 CMC was in the box that Mom had found in her attic and gave to me right before I went to Columbia.  I was able to put another of these minor league cards to good use, which I was happy to do.

I mailed to Rippelmeyer on January 16 and got the cards back on January 25, for a 9-day TAT.
Posted by William Regenthal at 10:26 PM