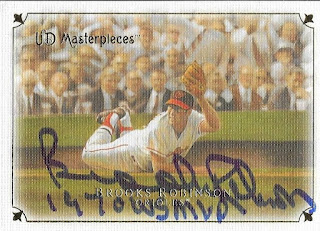 I still have to let this sink in.  Getting Ernie Banks TTM a few years ago was huge.  I even got Brooks Robinson TTM, but it was basically through a signing he was doing through the Dugout Zone in Maryland.  This time, the TTM was a real TTM.  I sent out cards, a note, an SASE and some cash and landed my all-time favorite player (sorry, Cal).  Not only did I get Brooks, but I got him on some pretty sweet cards.  The above 2007 Masterpieces turned out so awesome.  Brooks also inscribed it 1970 WS MVP without me even asking.  Also, this is the first Masterpieces card that I have been able to get signed, and it is a beauty.  The card is just amazing. 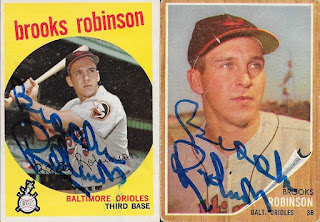 I saw that someone on Instagram got Brooks back without having to pay the exorbitant amount that Dugout Zone charges (he got Brooks for $1/card!), so I checked with the guy and confirmed the address that he used.  It was the one listed on Sportscollectors.net, so I wasn't begging anyone for a private address.  I wrote a two-page letter to Brooks explaining my fandom (and man-crush) and included $10 cash.  I wrestled between sending the above 1962 Topps or a 1969 Topps Deckle Edge, ultimately sending the '62.  The '62 was an extra card that someone somewhere gave me, long after I had already picked up a '62 for my Brooks Topps run.

Additonally, someone somewhere gave me an extra 1959 Topps, which has now shifted into my Brooks Topps run, because the above '59 was removed for TTM.  I chose that one because I distinctly remember where I got it.  I was at my dad's engine builder's 60th birthday party in Spartanburg, SC.  We were waiting for the party to start, and a few of us walked across the street to check out the mall.  There just so happened to be a card show going on, and one of the vendors had this '59 Brooks for sale for $20.  I went ahead and bought it, and added it to the PC.  Now, it is forever part of my autograph album, and likely part of whatever Topps or Orioles Autograph Project I pursue next. 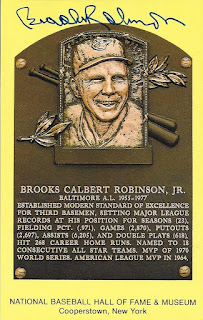 Being the amazingly awesome person that Brooks is, he included this Hall of Fame post card signed, as well.  This will go in my signed post card album, and will not leave the collection!

I mailed to Brooks on January 5 and got the cards back on January 20, for a 15-day TAT.
Posted by William Regenthal at 9:19 PM