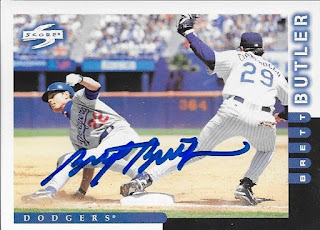 I got a bunch of great 90s cards in this TTM success from Brett Butler.  The above 1998 Score is one of the best horizontal shots that I have been able to get TTM, and I am really happy about it.  I don't recall opening up very many packs of 1998 Score, but the more I see cards from that set, the more I appreciate it. 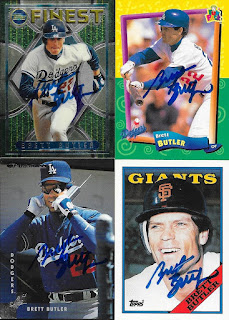 The 1995 Finest turned out really nice, even though it didn't scan all that well.  I'm also loving the Zach Morris phone in the 1997 Donruss.  I also believe this is my first Upper Deck Fun Pack card that I have been able to get signed.  Finally, the 1988 Topps Traded is one of the best of Butler's line of Topps cards. 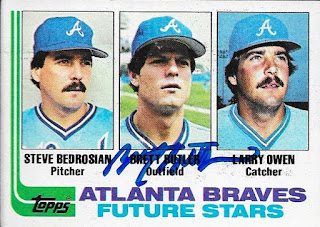 I also got a 1982 Topps card showing the Braves Future Stars signed.  I don't know if I will go for the other two guys, but I do believe Bedrosian signs, so I may give it a shot.

I mailed to Butler on November 8 and got the cards back on January 13, for a 66-day TAT.
Posted by William Regenthal at 5:49 PM