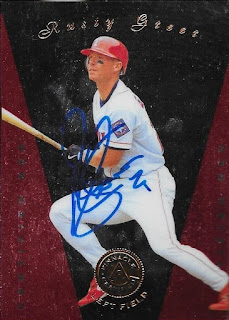 There is a box of cards at my LCS that has a ton of late 90s cards that I never got a chance to open when they came out.  I got out of cards in 1996, and didn't get back into them until 2005.  The box at the shop has afforded me an opportunity to cheaply pick up some of those late 90s cards, and use them for TTMs.  I was really excited to get this success back from Rusty Greer, because the cards in this request were pretty much the best of the best from that box.

That being said, just because the cards look awesome in person, that doesn't mean the awesomeness will transfer over to a scan.  The above 1997 Pinnacle Certified looks so nice in person, but it is badly curved, like a 2010 Topps Chrome.  Still, I like this card a lot, and I feel like it will do well in my album. 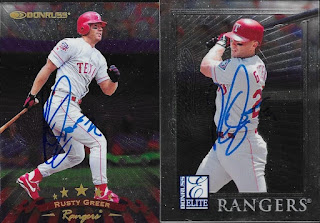 These two cards are much like the Pinnacle Certified.  They are both from 1998 Donruss Collections and, again, look much better than the scans show.  These two are also curved, but not as badly as the Pinnacle.  These are much thinner than a Chrome card, which may lend to the curvature. 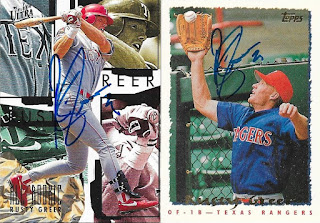 Finally, here are a few "normal" cards.  The 1995 Topps came from my box break while working on the set, and the 95 Fleer Ultra came from the LCS.  The Ultra is a really nice card.  It may be the best-looking of them all!

I mailed to Greer on January 5 and got the cards back on January 21, for a 16-day TAT.
Posted by William Regenthal at 7:37 PM