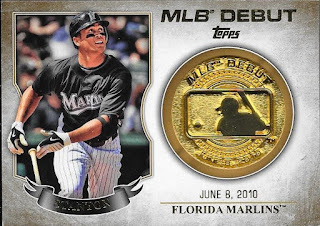 My buddy, Nick S., sent me a nice Christmas package a while ago.  He wrote me a note lamenting the fact that it cost too much to ship a bat that he had for me, so instead of shipping the bat, he gathered some relic and auto cards from his collection and sent those instead.  He still plans on sending me the bat, but wanted me to have something to open during Christmas. 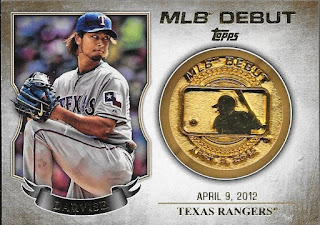 Nick is a really great guy, and any card would have been just fine.  I don't expect him to spend his money and give up a bat that he has had in his collection.  Still, it is the thought that counts, and Nick always is thinking about me.  It is really appreciated, and it won't be forgotten. 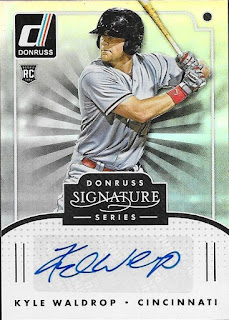 In the package were the two MLB debut coin cards I showed, this nice Kyle Waldrop auto from 2016 Donruss and a few more relics and autos.  Nick really went above and beyond for me for Christmas.  He didn't want cards, so I sent him some money via Paypal, instead.  I think he used it to buy equipment for his upcoming baseball season.

Thank you so much for the Christmas package, Nick!
Posted by William Regenthal at 8:24 PM