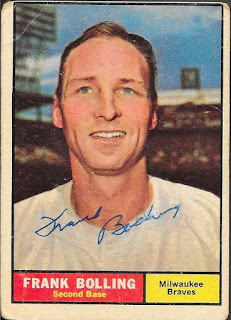 A day after my Ray Rippelmeyer success came in, I got another of the guys I found at the antique shop back.  This 1961 Topps Franks Bolling doesn't look as painted as the Rippelmeyer does, but it is still a nice card. 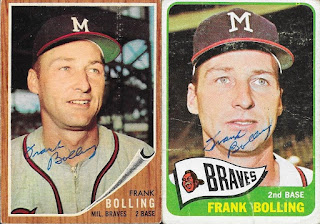 I had picked up a '62 Bolling at the shop and had the 1965 in my vintage box at the house.  That made for a nice little package to send out and see what happened.  Bolling has a very modest signature, but you can see it, so that's all that matters.

I mailed to Bolling on January 17 and got the cards back on January 26, for a 9-day TAT.
Posted by William Regenthal at 5:48 PM