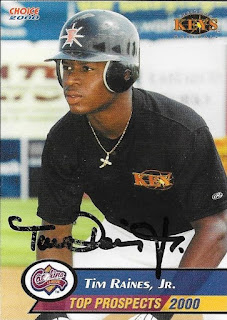 I had been going through my Orioles box, trying to find a few TTM subjects when I saw that Tim Raines, Jr. was signing.  I went through the two boxes I had and found only one card of his, this Choice 2000 card when he was with the Frederick Keys.  I didn't have many Minor League cards in my album, so this was a nice one to add.