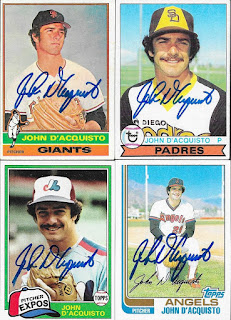 I added these four cards to my autograph album with this success from former pitcher, John D'Acquisto.  I actually saw that he had a Facebook profile, so I "friended" him before I sent my autograph request.  He is a very amazing artist, and posts a lot of drawings and artwork on his page.

I love his signature, and it looks great on the cards that I sent.  I really like how the old Padres hat looks on the 1979 Topps, as well.

I mailed to D'Acquisto on January 9 and got the cards back on January 17, for an 8-day TAT.
Posted by William Regenthal at 6:09 PM