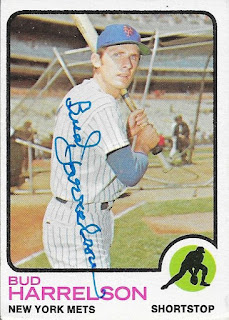 I got a lot of 1970s cards back signed from former player, Bud Harrelson in this TTM success.  He was a bit overshadowed, since he came back the same day that I got my Brooks Robinson success.  I was really happy with this one as well, though, because I added some much needed early 70s cards to the tally.

I liked how Harrelson signed this 73 Topps.  It turned out great, I think. 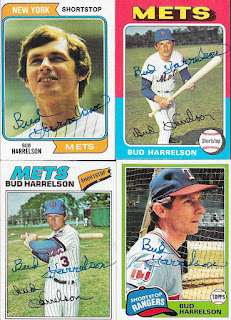 Here are some other Harrelson cards that I got, 1974, 1975, 1977 and 1981.  I have been getting a bunch of 1981 Topps signed, since I got a huge box of them from the Columbia antique shop, and they were all in order.  I used sportscollectors.net and pulled every player that has been signing recently.  That has helped me populate my TTM box. 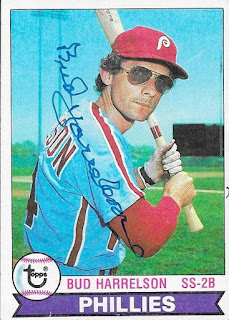 Finally, here is a nice 1979 Topps that I got signed.  I like the dark glasses on Harrelson.  He signed this one down his arm, which looks cool, as well.

I mailed to Harrelson on January 11 and got the cards back on January 20, for a 9-day TAT.
Posted by William Regenthal at 11:31 PM