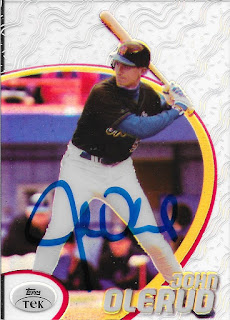 While I have been getting lots of cards signed TTM, I have been trying really hard to get a decent assortment of different types of cards and products represented in my albums.  When I got my TTM success back from John Olerud, I was able to add my first Topps Tek card to the mix.

This card is from 2001 and turned out really nice when it came back.  I had sent off another Topps Tek card before this one, but that card hasn't come back yet. 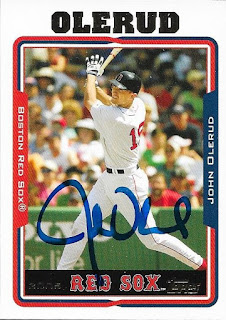 I also got Olerud on this 2005 Topps Update.  The blue Sharpie shows up really nice on the card, I think.

I mailed to Olerud on October 25 and got the cards back on January 18, for an 85-day TAT.
Posted by William Regenthal at 5:03 PM