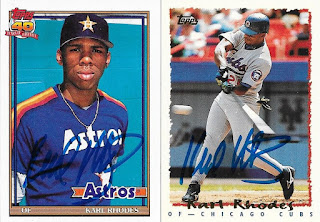 Ok, I was late to the party on this one.  I didn't make the connection between Karl Rhodes and Tuffy Rhodes until just recently.  I had seen his cards and that he signed, but had no idea that Karl and Tuffy were one in the same.  I got two nice Topps cards signed, the above 1991 and 1995.  They turned out really nice. 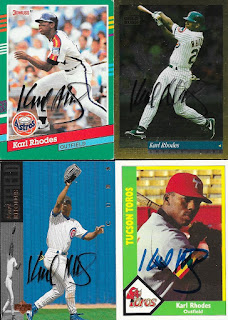 I had these other cards of Rhodes that I had found.  The 1994 Score Gold Rush was the card that got me started on him.  I was also able to knock off a 1990 CMC AAA from Mom's attic box.

Rhodes began playing professionally in 1986 at the age of 17.  He played until 2009, missing the 2006 season.  Over his 23 professional seasons, Rhodes had 2,863 hits, 531 home runs and .280 batting average.  I wish I had made the connection sooner; I would have been much more excited when I got the cards back.  After reading all of his stats, I'm sitting here and thinking - WOW!