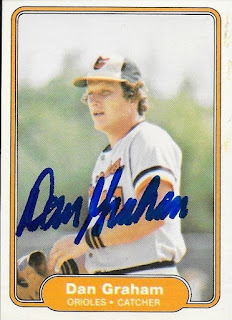 Here is another player who lingered in my TTM box for a while, before I finally got around to mailing to him.  I raided my Orioles box for guys who signed a while back, and kept these Dan Graham cards around.  I honestly got tired of seeing them in the box, so I finally mailed them out, and I was glad that I did.  I didn't have too many of the 1982 Fleer cards in my autograph album, so this was a nice one to get back signed.  The photos on the early Fleer cards are usually out of focus and/or blurry, but this one was ok.  I know the Cal Ripken rc from this set isn't the best, because of the blurry shot from a distance, but for what it is, it isn't too bad of a set. 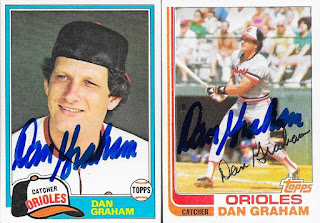 I got a couple nice Topps cards signed, as well.  Can't go wrong with the backward cap photo on the 1981 Topps.  The action shot on 1982 is pretty nice as well.