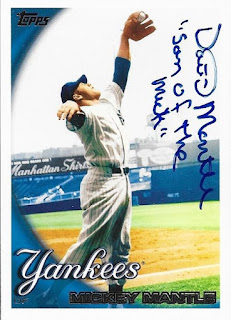 I actually had a few people look at me like I was crazy when I said that I had sent a couple Mickey Mantle cards off to his son to see if I could get them signed.  A while back, I had sent to, and received success from the widow of Jackie Robinson, Rachel Robinson.  I figured that it would be cool to take a few of the extra Mantle cards that I had and have his son David sign them.  I also have sent out an attempt to Julia Ruth Stevens for one of her signatures.  I think it is pretty cool to reach out to a relative of a deceased player, as long as the request is tasteful.  It is all in how folks view it, I guess.

I did get a Topps year taken care of with this 2010 Topps.  It still counts, in my mind.  I like the "Son of the Mick" inscription. 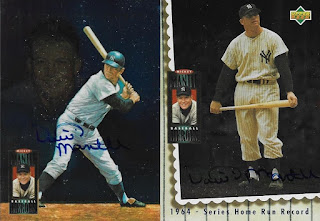 He also signed these two Upper Deck inserts that came out of my 1994 box that I busted with Chris.  They turned out really nice, even though they didn't scan as well.