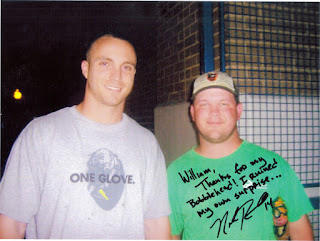 My post the other day about the recent Nolan Reimold pickups that came in was written the night before while I was hanging out at my parents' farm.  I had the post scheduled to post the next day for two reasons, one was because the internet connection out there sucked and the other was because I knew I would be spending most of the day driving home.  While I was driving home, my friend, Ryan, texted me and told me that Nolan had announced his retirement.

I had an idea it was coming, especially since Nolan wasn't picked up by any MLB organization this past offseason.  He was playing with the Long Island Ducks in the Independent League, and finally decided to call it a career.  His wife, Jenny, posted a really nice Facebook post saying that he's not completely done, but it taking some time off to be with his family for the summer and then weigh his options.

I'll always be a huge Nolan Reimold fan.  Every time I met him, he was super nice to me.  I hope that I am able to keep in touch with him in the future.  My ultimate hope, if his playing days are truly over, is that he remains in the O's system coaching one of the minor league teams.  I'm not sure if he wants to get into coaching, but I think he would be really good at it.

He got a lot of crap from some of the so-called Orioles fans.  Those folks seem to forget how Nolan gave it his all on the field, and even broke his neck diving for a foul ball for the team.  He was a fun player to watch, and I will definitely miss seeing him play.

At one point, Nolan read this blog.  If he still does, I would hope he sees this and knows that there are true Oriole fans out there who will always look back on his career fondly and will remember his contributions to the team.

Enjoy your time with your family, Nolan, you have earned it.  I hope I can see you again, someday!
Posted by William Regenthal at 10:00 PM