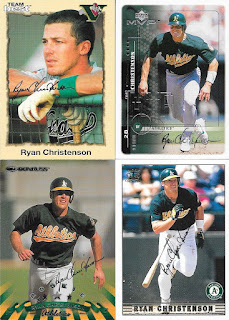 Check out the signature on these cards.  As tiny as Ryan Christenson's signature is, it really looks great.  There's something to be said about a nice, tidy signature.  Not like some big blob of ink on a card.  I like it when a player takes the time and care to sign their full name.  Much like Michael Cuddyer learned from Harmon Killebrew.

I had a few nice cards of Christenson that I had found at my LCS.  My favorite is the 1998 Team Best minor league cards (top left).  The Upper Deck MVP (top right) turned out really nice as well.  Well, they all did.

I mailed to Christenson via the Nashville Sounds on April 3 and got the cards back on April 20, for a 17-day TAT.
Posted by William Regenthal at 8:00 AM