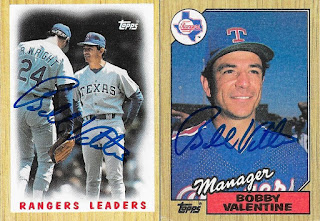 I admit that I didn't care for the guy when he signed on as the manager of the Red Sox.  I thought it was a bad move on their part, and for once, I was actually right about something.  That being said, I still feel that Bobby Valentine is a good baseball guy, and had a good career as a manager.  Working now as the athletic director for Sacred Heart University, I figured that I would take a chance and see if I could obtain his autograph via TTM.

I did pretty well, I think.  I was able to get him on two different 1987 Topps, running my total up on the set that I have the most cards of (signed and otherwise).  I really like how the Team Leaders cards look when signed.  Too bad Ricky Wright doesn't sign (at last check), because that card would be 43rd all-timereally cool with both of their signatures. 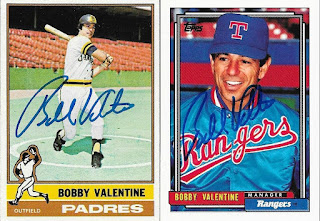 I was able to get the 1976 Topps card of Valentine as a player signed as well.  The 1992 Topps was nice, due to the awesome Rangers jacket that Valentine is sporting.