Graphing The Wood Ducks Vs The Mudcats 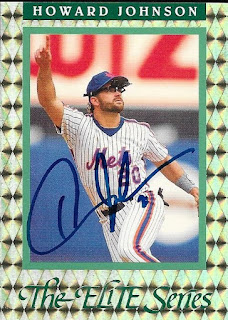 I'm getting more and more comfortable graphing at Grainger Stadium.  So much so, I brought a friend from work to the game with me last Thursday and wasn't embarrassed that she was able to see me in action.  I had accepted several 50/50s and with some events upcoming, I wanted to make sure I was able to get the Ducks as soon as I could.  They are also on a long road trip now, so Thursday would be my last chance for a while to get some cards done.

I had bought this 1992 Donruss Elite Howard Johnson off of EBay for around $8.00.  I have the Cal Ripken auto from that set, but I saw the Johnson and figured that would be a cool card to get signed.  He usually signs only one or two cards, but this time around, he signed all 4 cards I had on my page.  The other three were part of a 50/50 for my friend, Gerard.  I will post the cards I get to keep from the 50/50, once I complete all of the cards he sent, and we decide on who keeps what.  This card is numbered 9,136/10,000.  That is pretty high numbering these days, but back then, everyone was excited that it was serial numbered. 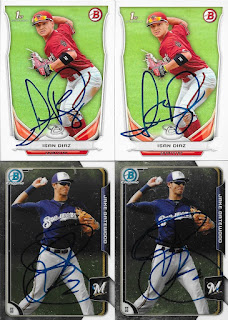 I wasn't 100% sure I was going to the game until the night before, so I thrashed looking for Mudcats cards that night.  Surprisingly, I found a ton of cards, and did pretty well getting a lot of them signed.  I had two each of Isan Diaz and Jake Gatewood, and they took care of all of them. 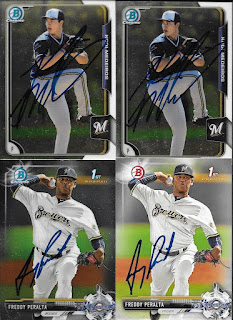 Same goes for Kodi Medeiros and Freddy Peralta.  I was surprised I was able to get Peralta, since he was the starting pitcher that day. 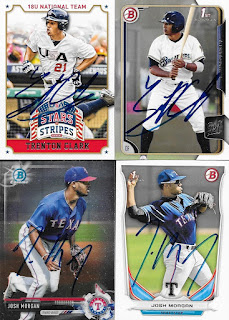 Trent Clark only signed two of the 4 cards that I had, but that isn't a big deal, because I can go to Zebulon and see the Mudcats again.  That way, I'll still have some cards I can take along.  I also got a 2017 Bowman Chrome signed for Andrew.  We pulled a couple of them while I was visiting him last week. 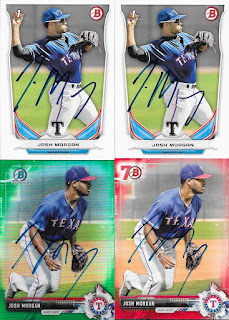 My friend, Angela, actually got the two Josh Morgan 2014 Bowman signed for me after the game.  He was really nice, as always, and signed twice for me.  The 2017 Bowman green chrome parallel is numbered 72/99.  The red isn't numbered. 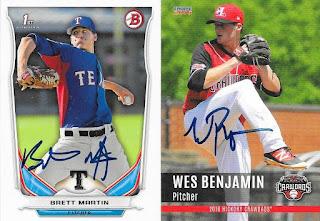 I still had some of the Hickory Crawdads team set that I could get signed, so I was able to get this Wes Benjamin taken care of.  I also saw Brett Martin for the first time in a while.  He is just about ready to come back from the DL.  He stood and talked to me for a while and signed my cards. 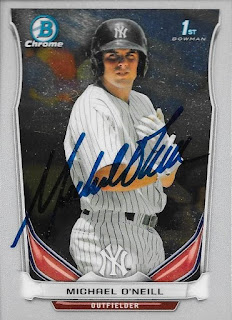 I had also accepted a 50/50 from a kid named Alex in New Jersey.  He wanted a Tampa Yankees Mike O'Neill signed for his set, and gave me two 2014 Chrome O'Neills.  I got one of the two Chromes signed, and can get the other next time I go. 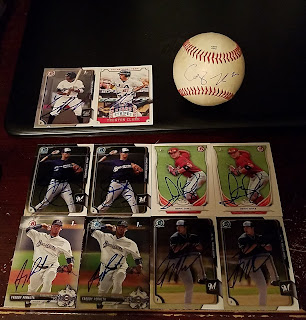 I also was able to get Brewers prospect Corey Ray to sign a baseball (Official Carolina League) after the game.  He had said he would sign after he stretched, but we ended up having to wait until after the game.  Here are all of the autographs I got from the Mudcats, which isn't too bad, considering that I thrashed the night before to get cards together. 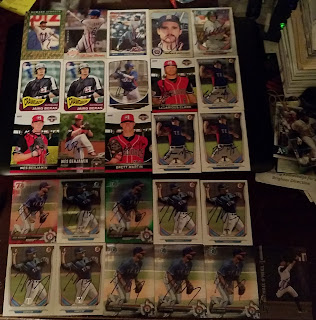 These are all of the Wood Ducks autos that I got.  The O'Neill for the 50/50 with Alex is at the bottom right corner.  I also did 50/50s for Gerard, Andrew and Dugan.  Dugan will get a Brett Martin 2014 Bowman, and a bunch of Crawdads team cards.

I hope I can get to the Wood Ducks again during their next homestand, but it is only a three-game series against Wilmington, June 4-6.  I'm not sure if I can get to those games or not.  The Wood Ducks then will go on the road and won't be home until June 15,
Posted by William Regenthal at 10:31 AM