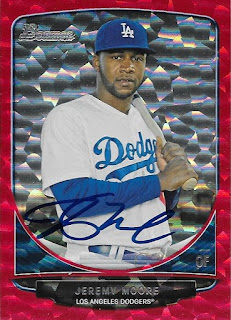 I had a really productive weekend this weekend with two Down East Wood Ducks games.  I had bought a few lots of cards off of Ebay to replenish some of the players that I had gotten already this season.  I also needed some cards of a few guys that I didn't have before.  I got this really sweet 2013 Bowman red ice parallel of Ducks coach, Jeremy Moore really cheap.  I had a few conversations with Moore this weekend.  He is always friendly with us, and has been willing to sign whatever we have had.  That is always nice, when you are standing there waiting for the game to start. 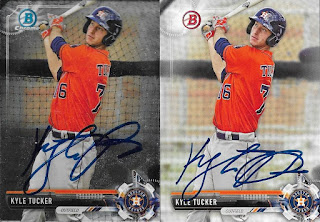 I hadn't really looked for any Buies Creek players until my friend, Sam, messaged me the night before last, asking if I was planning on getting Kyle Tucker's auto.  Luckily enough, I had three of his cards in my 2017 Bowman box.  Tucker was really nice.  He signed a ball for us, and the three cards that I had. 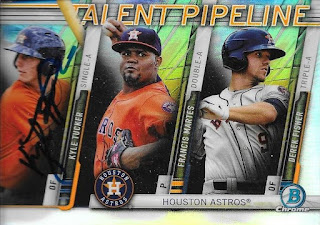 This was the third card that I had.  I don't know if I will be able to get the other two guys or not, but it still looks cool with Tucker's auto on it.  Chris and I actually arrived to the part too early (I thought I saw that Saturday's game was at 4, but it was really at 6), but we were able to get Tucker when he got off of the Astros team bus.  It worked out fortuitously.  In the time that Chris and I were waiting for the gates to open, we took a few laps around the stadium and found a baseball in the empty lot behind the stadium.  I don't know if it was a home run ball from the night before or a BP ball, but it was still really cool to find one.

We spoke with Tucker inside the stadium as well, and he posed for a photo.  I printed out the photo today and he signed it this afternoon for Chris. 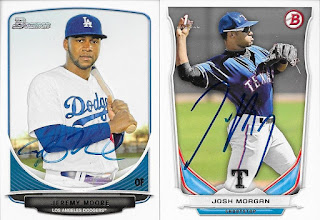 I bought bulk lots of cards of Jeremy Moore and Josh Morgan.  Both of them are really generous with their signatures, so all told, I picked up 7 signed 2013 Bowman and one 2013 Bowman Chrome from Moore (not to mention the Bowman Ice at the top of the page) and 10 Josh Morgan signatures on 2014 Bowman.  I plan on sending the extras out to friends who have helped me get autographs in the past, so adding the bulk cards will really help out. 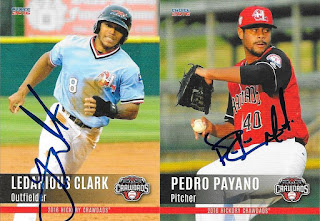 I also added two more signatures on the Hickory Crawdads cards that I picked up early in the season.  If it weren't so expensive to buy the sets, I would pick up a couple more. 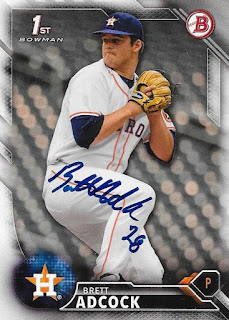 I ran into a few familiar faces this weekend.  One guy was graphing next to me was someone I see at the Raleigh card shows all the time.  He was nice enough to give me a blank Brett Adcock card for me to get signed in exchange for me getting an extra for him.  I had no problem with that, as we worked together to get autographs Saturday, making easy on each other.  I see a lot of folks treating graphing as a competition, but I like it a lot better when the folks out there are working together.  There's no sense in being a jerk about getting autographs.  Don't ruin the hobby for others. 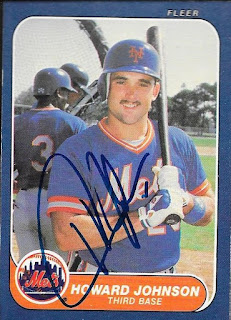 I was able to get some more cards signed by Wood Ducks manager, Howard Johnson.  He is usually really busy as he is coming out of the clubhouse, but he has always stopped for us.  I have enjoyed getting all of these different cards signed.  This 1986 Fleer turned out really nice.  It really matches the Mets color scheme.  I did ask Johnson today the $100,000 question.  He did not have any relation to the old Howard Johnson hotel chain, even though their color scheme was very close to that of the Mets.  He did mention that he wished he had done something with them in the past, as it would have been pretty cool. 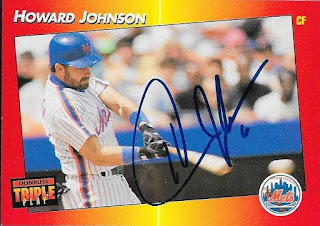 My wife was a real trooper this weekend.  She was tired from work yesterday, so Chris and I went by ourselves to the game last night.  She met us at the park today (she passes by it on her way home from work) and spent Mother's Day with us there.  She was able to "run" the bases with Chris (they actually walked them) after today's game.  She also got in free this afternoon.  She stood with us today and got this card signed for me.

Chris also helped get autographs for me, and also some for himself.  He really wanted the Flair card (bottom left), so that one is going into his collection.  He hasn't come in here yet to tell me which other cards he wants, but I plan on at least giving him the 1986 Topps as well. 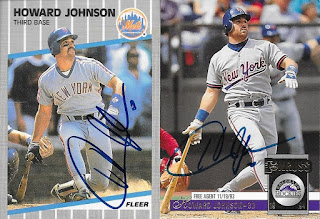 Luckily, Chris got the 1989 Fleer signed.  That one is going to a graphing friend of mine who is building that set.  We have worked out a deal for it, and I imagine it will be shipped out soon. 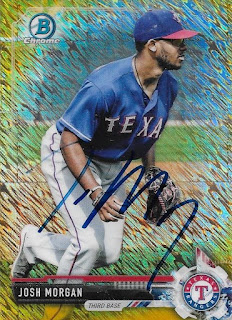 Like I said before, Josh Morgan is really generous with his time and his signature.  I think because he always has stopped and talked to Chris and I at games, I will be starting a PC of him.  I also want to get some more of his shimmer cards like the one above and get them signed.  They look so great.  This one, I got off of Ebay for around $4, and it is numbered 29/50.  I really want to get the orange parallel, but have missed out on it so far. 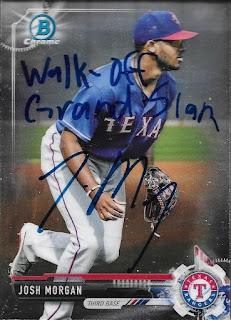 Finally, the Wood Ducks won today's game and snapped a 6-game losing streak.  They won the game in grand fashion (pun intended) when Morgan launched a grand slam to beat the Astros 10-6.  It was the first time I have seen a walk off grand slam live.  I called the shot to my friend, Jacob.  I think it was really awesome that Morgan was kind enough to inscribe this card with "walk-off grand slam".  I had given Jacob my remaining Morgan cards, but he was nice enough to give me this 2017 Bowman Chrome.  This card will definitely look awesome in my album!

I am not too sure when I will be graphing the Wood Ducks next.  I am taking some 50/50s now for a few friends, especially my good friend, Gerard.  He has a package on the way containing a few guys that he needs, and he will be returning the favor by getting me some Pawtucket Red Sox.

Stay tuned next week for what is going to hopefully be my next graphing recap, of the Bowling Green Hot Rods.
Posted by William Regenthal at 9:19 PM