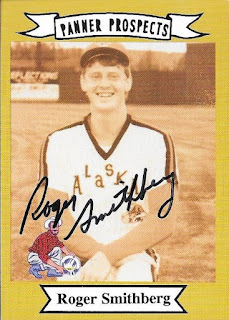 I was really excited when this TTM success came in from Roger Smithberg.  I was searching for some cards on COMC and discovered this Alaska Goldpanners card.  It is a 1990 Lens Alaska Goldpanners card, like a retrospective of former players (Jason Giambi has a card).  According to their website, the Goldpanners of Fairbanks are a collegiate level team famous for their "midnight sun games".  Their website boasts that over 200 Goldpanners have reaches the major leagues.  Players such as Barry Bonds, Dave Winfield and Tom Seaver have played for Fairbanks.  So, adding this card to the autograph album is pretty cool, in my mind. 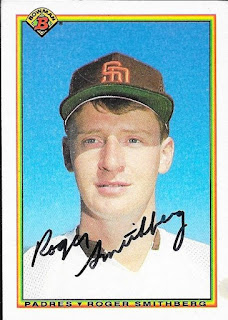 I had this 1990 Bowman in my TTM box for a while, but it was the only Smithberg card that I had, so I was waiting around to see if I could find any others.  I got lucky when I saw the Goldpanners card on COMC and remembered that I had one to send.  It all worked out.

I mailed to Smithberg on April 8 and got the cards back on April 17, for a 9-day TAT.

To read more about the Alaska Goldpanners, check out there website, here.
Posted by William Regenthal at 11:14 PM