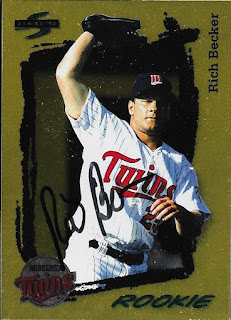 Rich Becker is another player that sat in my TTM box for a long time before I mailed his cards out.  The good thing about that is, I was able to compile a bunch of cool cards to send for signature, like the above 1995 Score Gold Rush.  I always liked the mid-90s Score, and this one looks really cool when signed. 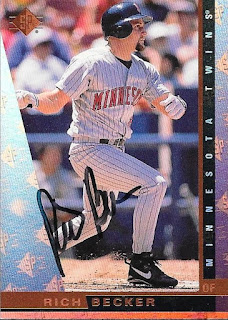 The best card of the bunch, though, is this 1997 Upper Deck SP.  These really look nice, and I have maybe 4 or 5 from that set signed now.  The scan doesn't really capture how cool the card is, but take my word for it, it is pretty nice in person. 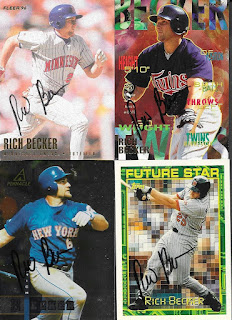 I also had these four cards, highlighted by the 1995 Fleer.  Those are still some funky cards to get signed, but signatures really look good on them.  The 1996 Fleer (top left) turned out nice, as always is the case with that set.