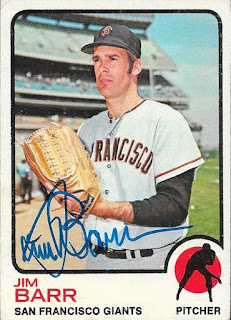 I had a wave of TTM successes come in while I was away at Andrew's.  I love having some variety when I do my TTM posts, but for whatever reason, most of the cards that came back were early 70s cards.  I think it was because the batch I sent out at the time was from my trip to Columbia, and most of the cards were from that era.  It is interesting sometimes how certain groups of cards come back quickly, and others take a while and get mixed in with the rest.

I was happy to get this return from Jim Barr, though, because I had a few of his cards sitting in my box for a while.  I polished off the request with a couple from Columbia, mainly the above 1973 Topps. 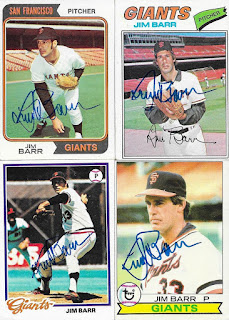 I got a nice assortment of 70s Topps in the success from Barr.  Most of them came out of boxes from the Columbia shop at different points in my adventures, but a few of them also came from the February card show.  Looking at the cards, a bunch of them are empty stadium shots, which is interesting.  Lots of pregame practice going on, I suppose. 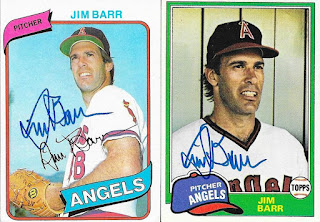