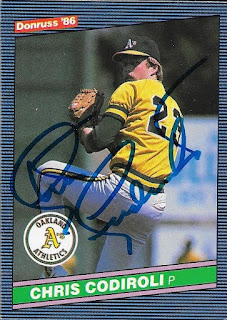 I added a few mid- 80s cards to the autograph album with this success from Chris Codiroli.  The above 1986 Donruss is a really cool card.  I don't have a whole lot of 86 Donruss in the album, but I do have a bunch in bulk.  The problem is, that box is at the bottom of all of my boxes, covered with Topps cards.  I need to get into that box again and look through it to make sure I don't have some guys in there that I haven't mailed to yet. 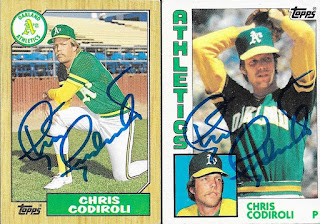 I also had found two different Topps cards of him, a 1987 and a 1984.  I had a ton of the 84 for some reason, so the extras of him that I didn't use were sent out as TTM starter packs to some folks on Instagram.  I hope they have the same luck I did.

I mailed to Codiroli on April 4 and got the cards back on April 13, for a 9-day TAT.
Posted by William Regenthal at 5:46 PM