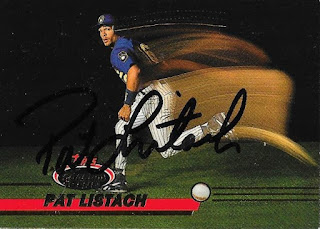 I had met Pat Listach back in 2011 when I saw the Pirates play the Cubs at PNC park with my cousin, Andreas.  I got him to sign a ball back then.  I'm not quite sure which cabinet the ball is in now, but I'm sure it is buried under a bunch of other signed baseballs.  Listach was actually one of the first players that I set aside for TTM purposes, then for whatever reason, I waited to send to him,  I kept collating cards of his, and kept seeing him pop up when I would search for someone to send to.  I finally got around to sending to him a few weeks ago; I sent to him via the Tacoma Rainiers (which is why I waited so long to send to him).  I sent four pretty awesome cards, and got this one 1993 Stadium Club back.  I guess of all of the cards for him to send back, this one was the coolest, with the over-exposure.  It turned out really nice.