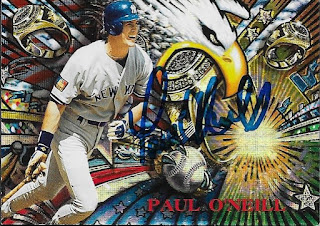 I took a shot on a TTM request that I thought I had a decent chance of getting back, but I had seen that folks have had spotty results with Paul O'Neill.  This 1995 Stadium Club Ring Leaders card had been in one of my boxes for a long time, so I figured that I would go ahead and see what would happen.  I'm really glad I sent it off!  After I had mailed this card to O'Neill, I got a Ring Leaders card signed by Howard Johnson, but this one is still pretty awesome.