IP Graphing Recap From My Trip 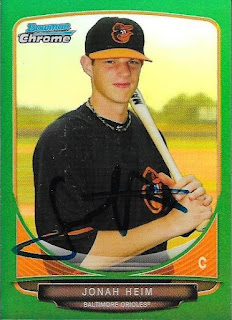 One of the things Andrew and I planned on doing while I was visiting him was to go to a Cardinals game, and also a minor league game in his area.  The Bowming Green Hot Rods are the closest minor league team to him, so we were able to find a home game to attend while I was in town.  We also were fortunate enough that the St. Louis Cardinals were also at home while I was there.

One of the highlights of being able to see Bowling Green (the Single A team for the Tampa Bay Rays) was that I could finally meet Jonah Heim.  Heim was a former Orioles farmhand who was dealt to Tampa last year for Steve Pearce. 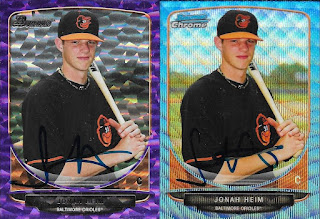 I had a bunch of Heim's cards, so I split them with Andrew, and we got all of them signed.  I was especially happy about the 2013 Bowman Chrome green mini numbered 65/75.  I also got the blue shimmer, purple ice and refractor signed. 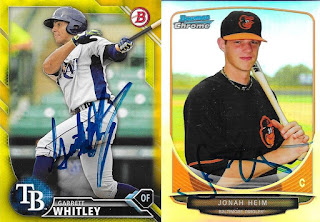 I bought some Garrett Whitley cards for the trip, and I also accepted a 50/50 from my good friend, Gerard, but Whitley only signed two cards for me.  One of them was the above yellow parallel from 2016 Bowman, and a 2015 Bowman paper for Gerard. 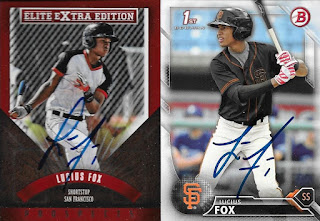 I got two cards signed by Lucius Fox.  I had bought three Bowman Platinum, but he wouldn't sign them.  He said that it wasn't him on the card, but how many Lucius Foxes are playing in the minors? 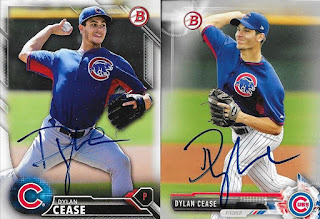 I also bought a bulk lot of Dylan Cease cards.  He was on the DL, but was gracious enough to sign for Andrew and I.  I got a 2017 Bowman Chrome taken care of for Gerard, and the rest of the ones I had signed were from what I picked up. 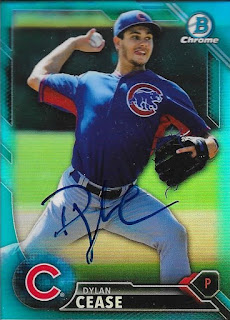 I really like how this blue parallel of Cease from 2016 Bowman Chrome turned out.  I got it pretty cheaply off of Ebay specifically for the trip.  Andrew is going to try to get the rest of the cards taken care of for me as the season progresses. 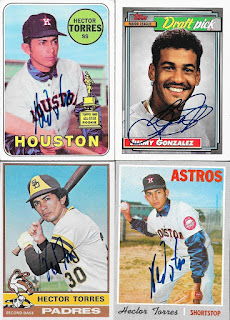 I did really well with the coaches, too, with the exception for mistaking the Hot Rods manager for Hector Torres.  Apparently there is about a 30-year age difference between the two, and the manager was happy to have a "serious discussion" (his words) with me.  I'm going to have to get one of his cards and send it to him and have him inscribe it "I am not Hector Torres".  That would be funny, and make my embarrassment worthwhile. 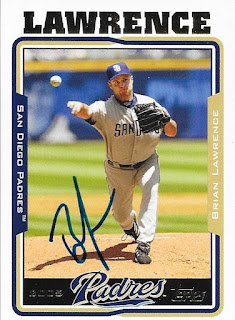 I dug through my mid-2000s Topps boxes at the last minute before I left for Andrew's, and found two Brian Lawrence cards.  I gave one to Andrew, and got this 2005 Topps signed. 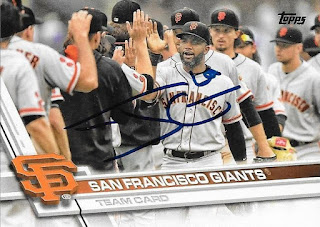 I did have a little success at the Cardinals vs. Giants game the day before.  Andrew and I each got one of these 2017 Topps Giants team cards signed by Giants reliever, Josh Osich.  It really is a crapshoot in being able to figure out which MLB players will sign, so I was happy that I brought along the random team card.

I had a really great time at both ball parks.  I now have been to 4 MLB parks (Baltimore, Pittsburgh, Detroit and St. Louis), and countless MiLB parks (I will update my map soon).  I also had fun with Andrew, and hope I can get him down my way to graph the Wood Ducks sometime soon.
Posted by William Regenthal at 4:22 PM