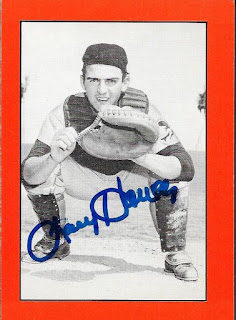 Here's a pretty cool TTM success that I waited quite a while to return.  Larry Haney is a former Oriole, which puts him on the priority list for TTM, but he also was a Seattle Pilot, so I definitely wanted to get his autograph on some cards.  The cards that I sent were all really cool cards, starting with the above 1981 The Franchise 66 Orioles.  I have no idea where I got this card, but it is the only one of these that I own, so it is a nice piece to add to the autograph album.  The post on the card looks awfully familiar... 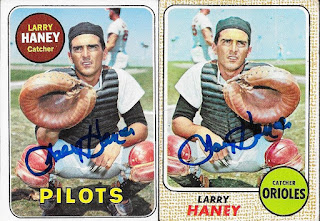 A lot of folks complain about some instances where Topps recycles photos, etc.  I don't necessarily mind it, because it kind of adds some nuances to sets.  Take the two cards above.  The one on the left is a 1969 Topps, the one on the right is a 1968.  Haney wasn't a "switch catcher", the photos are reversed.  I thought this was really cool, and it was an accident that I had these two cards to get signed.  It just worked out that way. 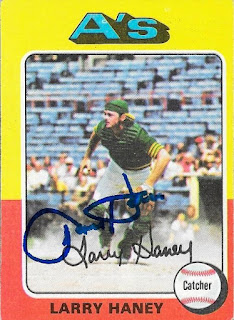 Finally, here is a really cool action shot of Haney on a 1975 Topps.  I like all of the colors on this card, which makes it stand out.  Also, there are a lot of empty seats in that stadium.