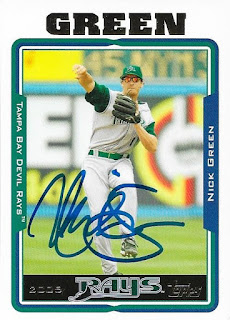 This TTM success was really nice due to the more recent cards that is entailed, and that two of them were horizontal cards that turned out really well.  The above 2005 Topps Update was a nice card to get back from Nick Green, but I would have much rather it have been a base Topps instead of an Update.  I don't consider Update cards when I count cards toward my Topps Autograph Project.  Still. it is a nice card, and looks even better now that it is signed. 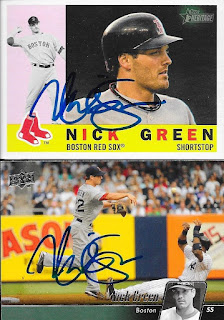 Here are the two horizontal cards that I got signed.  The 2009 Heritage High Number card turned out great.  I love the 1960 design, and this one really looks good.  I never had a problem with Upper Deck's last issue of cards, 2010, and Green's card looks great when signed.  You don't even notice that you can't see logos.