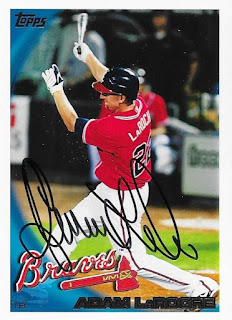 I really like it when I can add a recent player to my autograph album.  It was really tough picking out which card to send to Adam LaRoche, since he only signs one-per.  I went with this 2010 Topps, mainly because I didn't have very many of them represented in the album, and I wasn't able to find him on some of the cards I REALLY needed.  Plus, I like the colors on this card, so it ended up being the right one for me.

LaRoche (b. 1979) played in the majors from 2004 to 2015 for the Braves, Pirates, Red Sox, Diamondbacks, Nationals and White Sox.  He had 1,452 hits, 255 home runs and a .260 batting average.  He finished 6th in the NL MVP voting, his only year where he received votes.  He also was a Gold Glove Award winner and Silver Slugger that season.