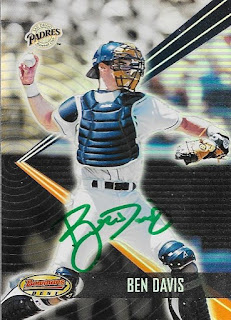 The above 2001 Bowman's Best that I got signed TTM by Ben Davis might be one of the best-looking cards that I have gotten back, so far.  The card looks so great, and Davis signing with a green Sharpie kind of adds to the novelty of the card.  I actually found a few 01 Bowman's Best at my LCS, so I have a couple other guys I can send to.  I hope those come back looking just at nice as this one. 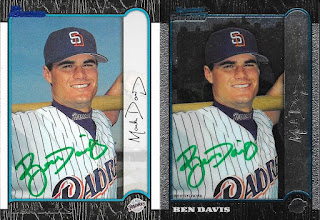 I found these two Bowmans (a paper and chrome) from 1999 at my LCS, as well.  Both of them look great with the green Sharpie. 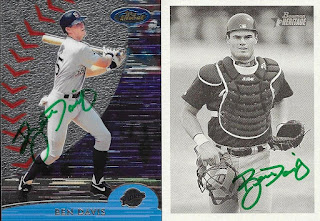 The 2000 Finest was yet another card from the LCS.  I have now gotten a few of these signed, and they all turn out really nice.  The baby powder helps them out tremendously.  The 2001 Bowman Heritage came from the February card show, and is what got me looking for Davis.  I needed to fill out a 10/$1.00 sale at the show, looked Davis up, and bought the card.  Now it is signed (as well as the others, of course), and will take a spot in my album.