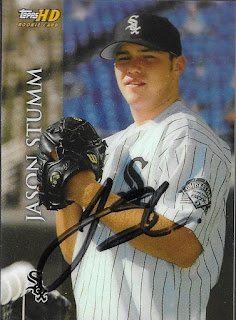 I wish I was around the card community in the late 90s and early 2000s.  There seem to be a bunch of cool sets that came out during that era, like this 2000 Topps HD.  The card is really thick, and heavy.  I had to pre-treat it with baby powder before I mailed it out to Jason Stumm.  I had never heard of Stumm before, but this was a really cool TTM success.