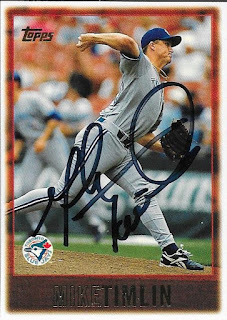 Here we have another player who floated around my "to be TTMed" box for a long time before I finally got around to mailing.  I actually sent three cards of Mike Timlin out for signature, but he only signed two of them.  The one card he didn't sign was a 1998 Score, but that's ok, it'll go in my "extras" pile that gets sorted, then mailed out to kids as TTM Starter Packs.  I figure that's a good way to recycle some cards once I have a success back; send them out to kids to help them since they may not have many of those years of cards. 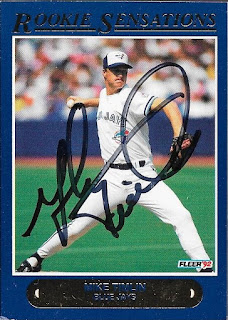 I was glad Timlin chose to sign this 1992 Fleer Rookie Sensations card.  This was picked up at my LCS, and I thought it would look nice in my album.  I always enjoy getting "different" cards signed.

I mailed to Timlin on January 11 and got the cards back signed on January 27, for a 16-day TAT.
Posted by William Regenthal at 5:57 PM