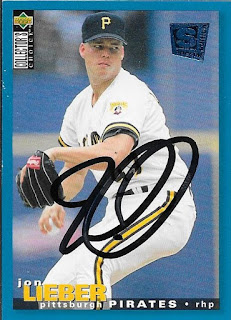 I was able to get some nice 90s cards back from Jon Lieber not too long ago. The above 1995 Collector's Choice SE turned out much better than I had expected.  This was a product that I got a ton of when I was growing up.  This card probably is a holdover from that era in my collection, most likely. I had so many of these cards, but unfortunately, lots of them were destroyed due to sticking together from the over-gloss.  Thankfully, this one will live on in my autograph binder. 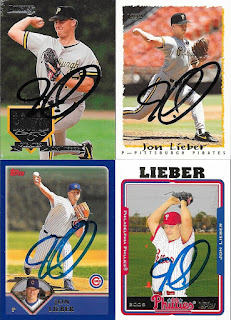 Here is an assortment of other cards I got from Lieber.  The top left 1995 Donruss looked really nice.  That was a set that I completed a while back, long after I started collating it in 1995.  I didn't love the set more than any other at the time, I just opened a ton of it and thought it would be cool to assemble the set.  The rest of the above cards are some Topps versions.  The blue 2003 Topps is one of only 4 2003s that I have been able to get signed so far.  I'm leaning toward buying an early 2000s box of Topps and 2003 is on the short list of cards I may pick up. 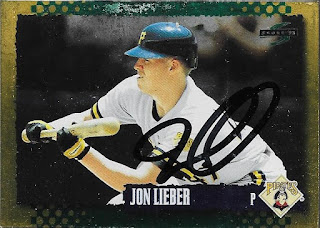 Finally, here is a card that was victim of the "sticking together" of the overglossed 90s cards.  I was able to pretty much salvage it, but it did take a hit.  I had to include it in the mailing, though, mainly because of the gold foil, but also because there are a few fellow bloggers who love "pitchers at bat".

I mailed to Lieber on January 11 and got the cards back on January 28, for a 17-day TAT.
Posted by William Regenthal at 6:18 PM