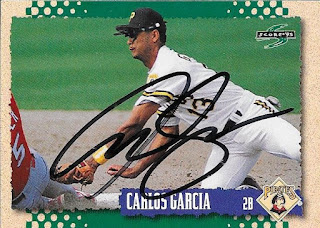 I was able to get a few really cool cards signed recently from former second baseman, Carlos Garcia.  This 1995 Score turned out really nice, I think.  I always liked this set, and at one point, tried to complete it.  This is one of those over-glossed sets, though, that tend to stick together.  I wish there was a way to fix this problem, but I don't think this exists.

I also added these three 90s cards.  I always enjoy the 1991 Fleer set.  The bright yellow of the set is very different than most sets out there, still.  Some folks don't like it, but I always have.  Of course, I like the 1990 Donruss set as well.  The middle card is a 1996 Fleer, which was made with autograph hunters in mind.  The rough finish makes it a pain to leaf through the cards, but they really look cool signed.  Finally, the card on the right is a 1997 Donruss.  I don't recall opening any packs of this when it came out.  The only versions I have are from bulk card finds and purchases.  Still, the design is nice, and the signed card looks good.

I mailed to Garcia on November 7 and got the cards back on January 26, for an 80-day TAT.
Posted by William Regenthal at 5:46 PM